In June and July 2016 we held a number of pop-ups in Loughborough Junction; at the Station, outside Wyck Gardens and at the junction of Loughborough Rd and Coldharbour Lane. We wanted to find out people’s priorities for improving the public realm in the area. By having an exciting, on-street presence at various locations relevant to the scheme we were able to engage in conversations with people and capture their feedback in an informal setting and on their terms.

Our ‘bandstand’ display table was to give the ‘pop ups’ and events a visual presence. It was used to prompt conversations about the history of Loughborough Junction and reference the Green Man Tea Gardens, which used to be in the area.  We designed this prop to allow for local businesses to be involved in making it. The dome of the bandstand was filled with African print fabrics purchased from Frikal Fabrics and Couture. The finial of the band stand was made by Felice Amato who runs a woodwork and wood-turning business on Rathgar Road. 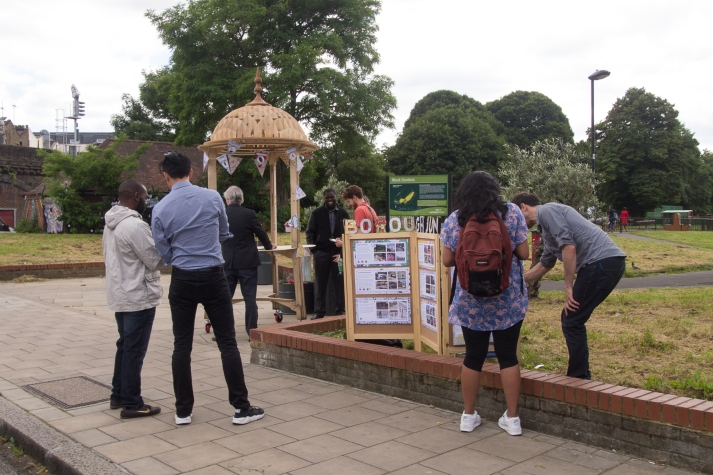 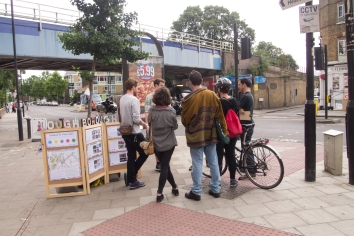 We also had a display stand showing precedent images of how each of the themes might manifest themselves in Loughborough Junction and collect people’s top 3 priorities for change. It was designed to display some of the lettering produced during the school workshops and provided a useful focal point for talking about identity and character.

This approach helped us ensure that we reached a cross section of relevant and representative local people. By positioning ourselves on-street and having curious props and visually interesting displays we encouraged people to want to talk to us. By going to where people are already, we removed barriers to being involved making it easier to reach the ‘hard to reach’.